sabrina-unlock: Bootloader unlock for the Chromecast with Google TV

An exploit chain intended to allow one to run a custom OS/unsigned code on the Chromecast with Google TV (CCwGTV).

This uses a bootROM bug in the SoC by security researcher Frederic Basse (frederic).

Frederic also did a great amount of work to temporarily boot a custom OS from USB here.

You are solely responsible for any potential damage(s) caused to your device by this exploit.

1: The USB password mitigation has been enabled on units manufactured in December 2020 and after. For units manufactured before, the mitigation was enabled by software update in February 2021. To discern this, look at the MFP date on the bar-code sticker on the bottom of your device’s box. If you’ve powered it on and OTA’d, your firmware version needs to be below the February 2021 patch level. It’s not possible to disable/change the password since it’s burnt into the chip (efuses).

Does unlocking the bootloader void my warranty on this device?

Does unlocking the bootloader break DRM in any way?

Can I OTA afterwards?

Can I use stock?

Can I go back to stock after installing custom OS’s?

Can I relock the bootloader?

I’ve run the exploit 10 times and it isn’t working yet!

The host should see a new USB device connection in dmesg like this one:

This exploit chain modifies the content of the env partition to unlock the bootloader. Therefore, it would be ill advised to do any of the following:

When the CCwGTV launched, a lot of us in the Android community were excited to see a proper successor to the Asus Nexus Player. A new Android TV to develop on!

Or not. When the CCwGTV launched, no kernel/modules/u-boot source was provided, and the bootloader was intentionally made non-unlockable.

He used it to temporarily boot Ubuntu on the device as a proof-of-concept, however, upon reboot, the device would boot back into its stock OS, and any attempts to modify the OS from the live custom environment would result in Android Verified Boot locking you out of the system.

Earlier this month, Jan and I found Frederic’s work and began to theorize methods to permanently unlock the device using the access provided by the existing exploit.

After procuring several vulnerable devices from eBay by looking at the MFP date printed on the barcode located on the bottom of the device’s box, we set to work.

The first hurdle to overcome is that all the CCwGTV’s bootloader images are encrypted with an AES key and IV. To statically analyze these, we’d need that key. The easiest way to do this is to dump the memory on the device when it’s in the earliest possible execution stage. Conveniently, as mentioned above, we have easy access to burn-mode, which is one of the earliest/most privileged execution contexts.

First, we dumped the device’s memory while in burn-mode using the payload Frederic provides here. We then got in contact with Frederic, who gave us the pointer that the AES key used to encrypt the bootloader lies at 0xFFFE0020. By changing the BOOTROM_ADDR variable to the address we were given, we were able to dump the AES key in question by reading out the first 48 bytes of the dump using hexdump, of which the first 32 bytes were the key, and last 16 bytes were the IV.

From there, we used Frederic’s scripts here in combination with the AES key we dumped to extract/decrypt sabrina’s existing u-boot image.

Awesome, now we just need to craft a u-boot image that unlocks the device… which while you may think would be one of the hardest parts, u-boot runs in EL3, which is a highly trusted context, meaning we can arbitrarily read/write most things.

Google released the u-boot source-code for the latest CCwGTV build here, and it served as an invaluable reference to analyze how bootloader locking on these devices is handled.

Amlogic handles most of their persistent u-boot and general environment variables by storing them in a partition called env. Initially, we thought we’d have to modify the variable responsible for determining is_unlockable, but quickly it became apparent that simply writing directly to the lock variable was the most effective way to attain our goal.

To figure out what that should be, we can look at the following line of code:

Translating this, the digits of this variable correspond to <version_major><version_minor><unlock_ability>0<lock_state><lock_critical_state><lock_bootloader>0, which handles rollback version values, lock state, and unlock ability.

This data is all fed into this struct:

Given this, simply inserting the following code block into common/main.c within u-boot source before run_preboot_environment_command which sets all these variables would (in theory) unlock the device:

Translating this mmc dev 1 just puts the eMMC module in a state that u-boot can write to it, setenv lock 10100000 directly changes lock status from 10001110, then save simply saves the environment. reboot fastboot isn’t necessary strictly, but it is the easiest way to have the user confirm if they’re unlocked.

We rolled our own u-boot with this integrated:

We then used Frederic’s repack_bootloader.sh to repack our customized u-boot and his customized BL2 image that ignores BL33 (u-boot) signature and nulls out the anti-rollback check.

Unfortunately, as things often are, this was not as easy as it would seem. The new image didn’t boot at all.

Turns out, we needed to follow Frederic’s example, and first enable UART console and configure it to debug the issue further. The awesome people over at Exploiteers already did the leg work identifying RX/TX pads on the board, and the awesome PCBite tools from the people over at SensePeek made it easy to get UART logs up and printing. 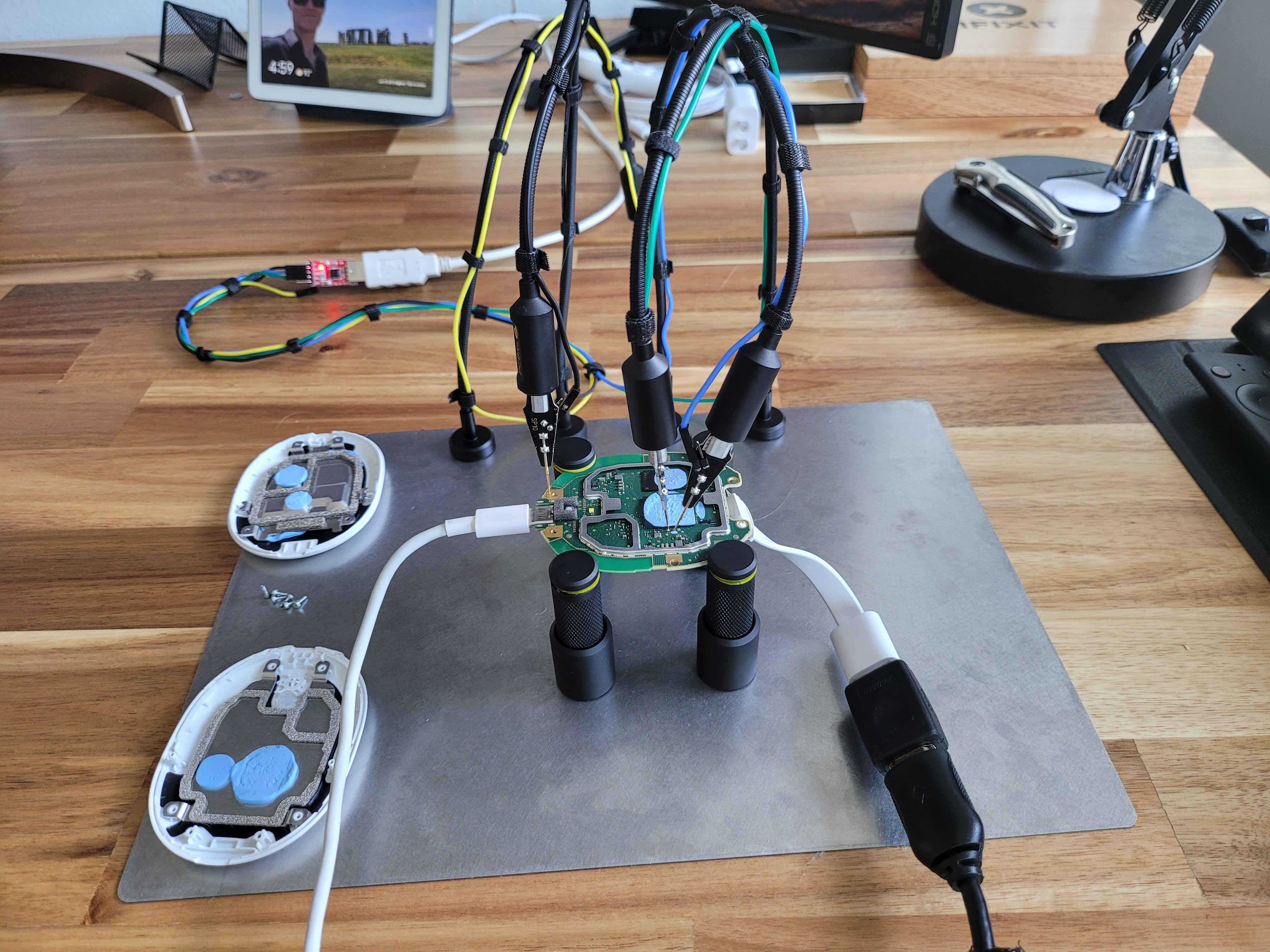 For convenience’s sake, we also removed the 0 second boot-delay and flags that disable update mode, and removed a few other small restrictions to debug the issue.

The issue turned out to be that we were getting tossed into burn mode - which was quickly discovered to be easily bypassed by disabling the config that forces it!

With this in place, it was as simple as re-building u-boot, repacking the bootloader image, and then re-running the exploit to upload the custom bootloader.

UART logs then showed that our u-boot was not only executed, but env modified just as we intended, saved to the block device, and then the device (tried) to reboot to fastbootd mode, however, likely due to lingering effects of the exploit, it booted back to burn mode. Simple unplugging the device and re-plugging it in let it fire up, detect the persistent boot-reason variable, and kicked us to fastbootd mode.

We then ran fastboot getvar unlocked to grab the lock status and… success!

Now, because Android isn’t stupid, and at least tries to maintain user-data security, attempting to reboot will dump us into Android Recovery saying the “System is corrupt and can’t boot”, simply using the button on the device, and short pressing to highlight “Factory Data Reset”, then long pressing it to select, and confirming your selection, then rebooting will remedy the situation, and your device will boot into the stock OS, freshly unlocked.

This was an extremely fun process and goes to show that releasing your vulnerability research can lead to even cooler discoveries!

Contribute to FOSS development on this device