Spotify Car Thing (superbird) resources to access U-Boot shell over USB. Not a bug, it is a “feature”. 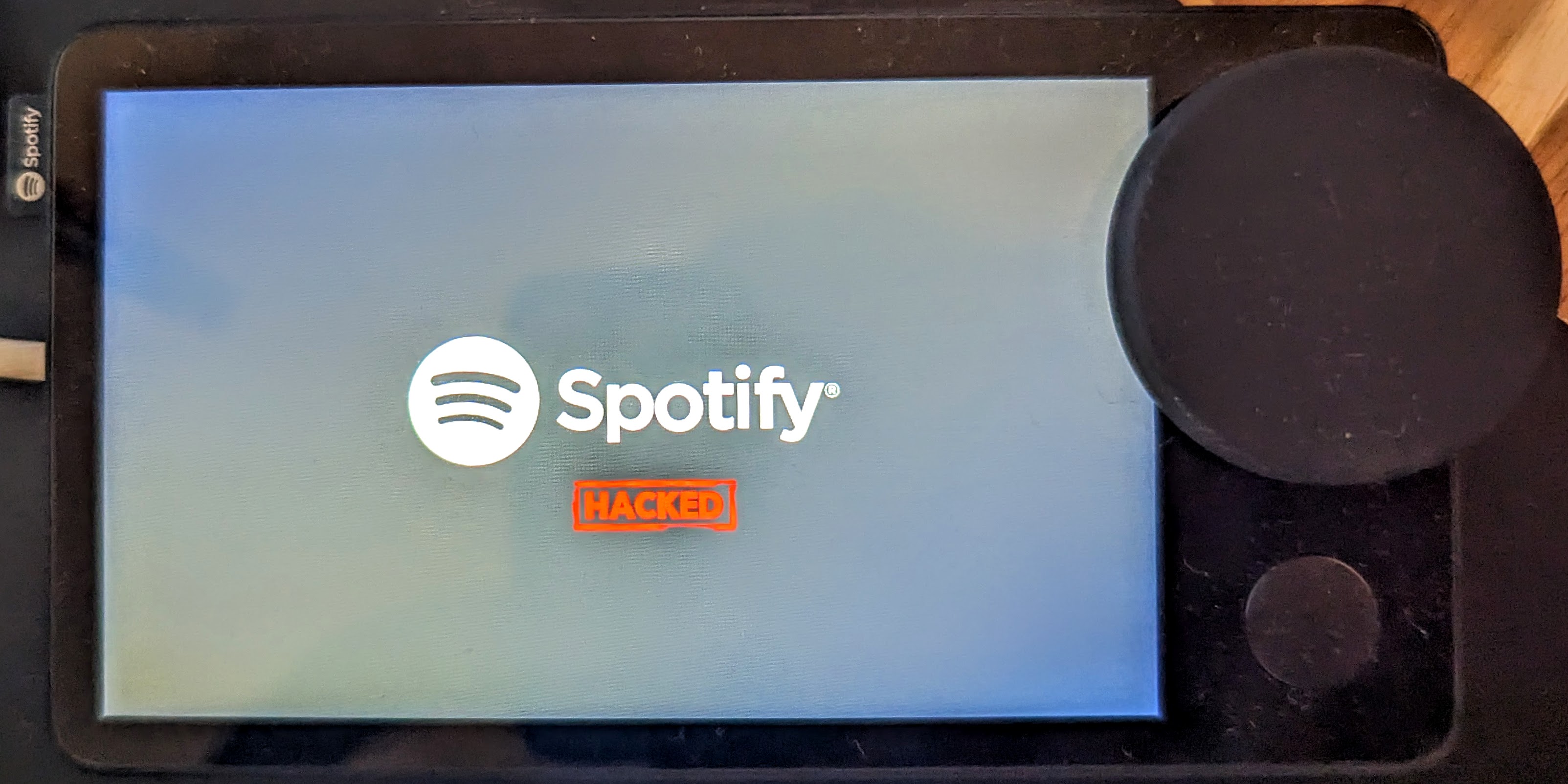 Note: this method has been tested on the factory firmware (device never used/updated : App Version 0.24.107 - OS Version 6.3.29), but should work on all firmware versions released as of this article’s writing.

Does this process void my warranty on this device?

Can I OTA afterwards?

Can I still use stock features ?

Can I go back to stock after installing custom OS’s or messing up the stock image?

The host should see a new USB device connection in dmesg like this one:

WARNING: This step modifies the env partition. Changes are persistent, so it shall be executed only once.

After this modification, the device always boots in USB burning mode (U-Boot shell over USB) when connected to USB host : you can execute U-Boot commands using the update tool, but you can’t see any output (unless you open the device to connect the UART interface).

Note: if not connected to USB host, the device continues default boot sequence.

Once the device in USB burning mode, the script scripts/upload-kernel.sh can upload a Linux kernel image and boot it. The init-ramdisk includes an initd script that starts the ADB server. System partition is not modified, so this is not persistent.

The ADB interface appears as a new USB device on the host:

Note: There is a script that is intended to be run from a UART shell included in scripts that will enable persistent ADB, but is not reccomended, as it will remove the abillity to OTA update. You can find that script here.

When the Car Thing launched, it largely flew under most people’s radar, and comically it wasn’t until Spotify deeply discounted it in late 2022, to $29.99 that it caught our eyes.

This device was designed to be a simple music selection device that mounts to your car dashboard or air-vents. It is unfortunately very underpowered, with a lower-end Amlogic chip, the S905D2, paired with 500 MB of RAM - ouch.

When the device was discounted, I (Nolen) picked up a few units for security research, and messaged Fred shortly after starting to ask about collaborating on it - and comically he had independently already started.

To start, U-boot and Linux kernel source code for this device is public but advertised nowhere by Spotify.

We discovered shortly into research, that holding buttons 1 & 4 on boot put the deivce into Amlogic’s USB mode, where you can upload BL2 images! Sweet.

From here we were able to execute U-Boot shell commands via Amlogic’s update command, and the bulkcmd feature it houses.

At this point, it became clear UART would aid our efforts, and with some simple voltage sniffing and an educated guess, we discerned the UART has the following pin-out: 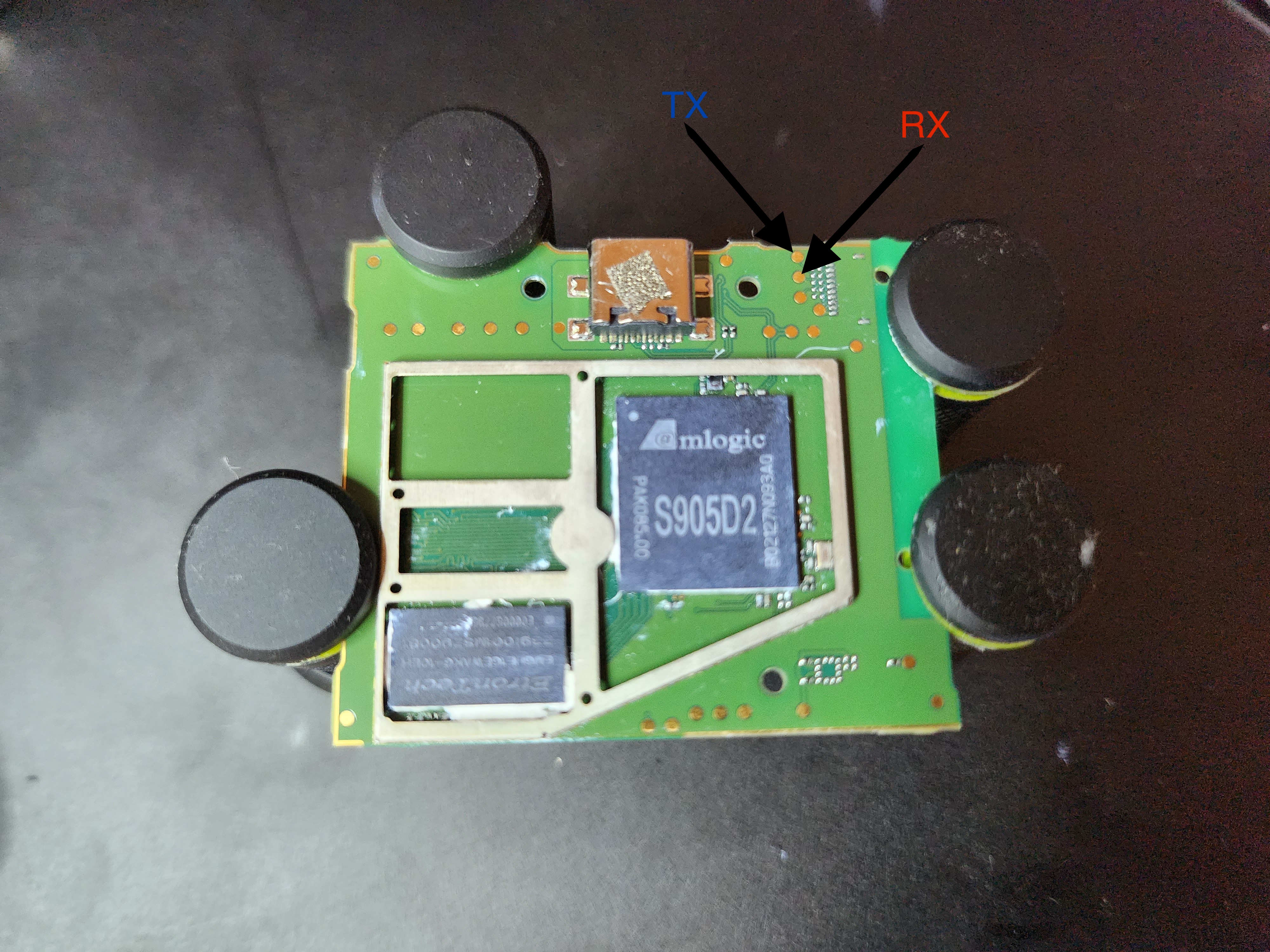 For our development case, we wanted more persistent access to the UART pins, so we removed the sticker on the rear of the device, dissasembled, removed the rear heat-shield, and then filed out part of the case, as shown below 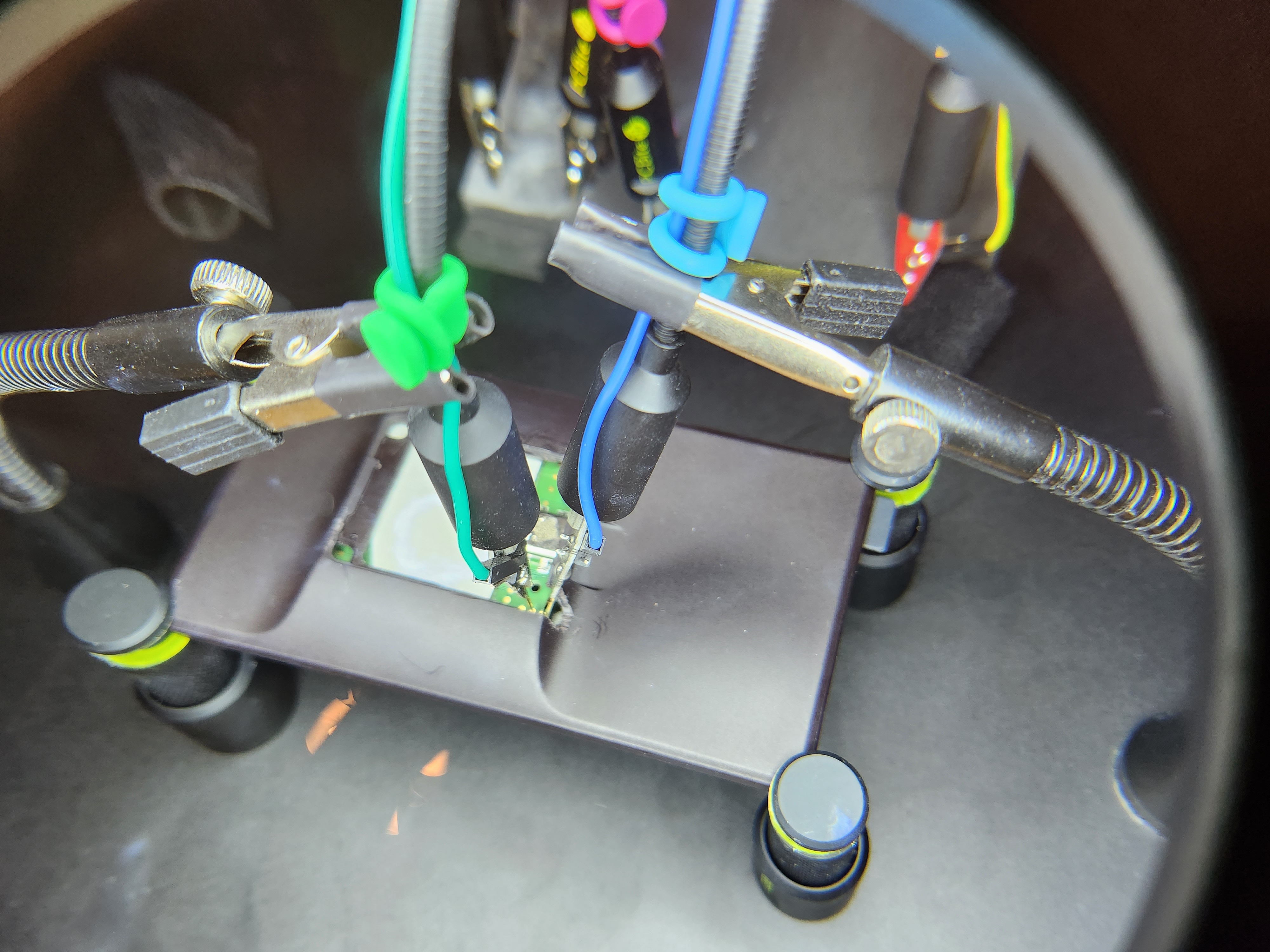 Once we had UART console, we continued about, and crafted a method to enable a root shell over UART:

This gave us a local root shell, but still required UART - we took note that the device happened to have adbd locally installed, but not running.

We realized it wasn’t as simple as just starting the daemon, we had to disable Android Verified Boot, and configure the device’s USB connection in an init.d script, as shown in scripts/enable-adb.sh.client.

At this point we had full u-boot access, as well as persistent ADB (root) access, we initially wanted to try to bring-up Android Automotive on the device, but 500 MB of RAM made Android near-impossible to port.

We also tried to get other GUI applications cough maybe doom cough running, but this device utilizes a QT feature called EGLFS, which doesn’t have a window management system like X11 or Wayland, so it is hard to get additional applications running on the device, but hey, maybe someone in the community can get it working using the access we’re providing!

We ended up settling on using a modified init-ramdisk loaded via USB to simplify attaining root-access for the end-user. Hope you enjoy!

To Be Executed from U-Boot shell

To Be Executed from an ADB (root) Shell on Device

Note: This writeup doesn’t technically warrant disclosure, as it doesn’t leverage any specific vulnerabillities, but instead chains together what we suspect to be unintentional access venues to gain root-access.